Aeroseal’s aerosol ductwork sealing technology was invented and developed by the Energy Performance of Buildings Group at Lawrence Berkeley National Laboratory in 1994. The research was funded by US Environmental protection agency, US dept. of Energy, Electric Power Research Institute and California Institute of Energy and Environment.

The University of California was granted initial patents in 1996 and 1999.

This technology seals the duct leaks inside out by injecting a fog of aerosolized sealant particles into a pressurized duct system.

•  All supply, return and exhaust grilles are temporarily sealed, so that all the airflow passes through the ductwork leaks;

•  Small aerosol particles are kept suspended in the airflow by continuous air movement;

•  As the air stream makes a sharp turn to exit through a leak, the particles collide with and adhere to the leak edges; and

•  Using adhesive solid particles allows the built-up seal to span leaks as much as 5/8 inch wide.

What are the advantages of Aerosol Ductwork Sealing?

Aeroseal can solve such problems as:

•  Musty odors or fume smells and other ventilation problems

Aeroseal has the exclusive license for residential and commercial application.

Aeroseal can reduce duct leakage by up to 90%.

Aeroseal Sealing reduces the entry of:

and improves the comfort level for homeowners and the overall performance of the HVAC system by:

•  Distributing heating and cooling more uniformly throughout your house.

An average American household spends $2000 a year on home energy bills. On average, 30 cents of every $1 spent on heating and cooling disappears into thin air due to leaky ducts. This duct leakage in homes costs consumers $25 billion each year on escaping energy. These leaks also force HVAC systems to work harder and ultimately wear out sooner. A home owner can save on average $600 to $850 a year on his or her heating and cooling costs thanks to a breakthrough  Aeroseal technology.Another related issue is duct leaks that contribute to poor indoor air quality. Indoor air pollution is an EPA high-priority public risk with levels of pollutants indoors being up to 5 times higher than outdoor levels. According to the EPA, most people spend roughly 90% of their lives indoors. This makes indoor air pollution one of the five most urgent environmental problems facing the US with 1 in 15 Americans having allergies or asthma. In addition, the average home produces twice the greenhouse gases as the average car. In fact, 15% of all greenhouse gases are generated from the energy used in houses nationwide. Another issue to consider is that excess humidity levels can lead to costly repairs for homeowners.﻿﻿

Aeroseal Duct Sealing is a patented breakthrough technology that tackles leaks from the inside out. Aeroseal software accurately measures the duct leakage in residential homes and commercial buildings. The Aeroseal process puts escaping air under pressure and causes polymer particles to stick first to the edges of a leak, then to each other until the leak is closed.

Before the Aeroseal technology is injected, technicians block furnaces, fans and grilles so that the adhesive particles will be directed towards cracks, leaks, and holes. The technicians then inject the aerosolized vinyl polymer particles, of two to 20 micrometers, into a pressurized duct system. The particles stay suspended in the air stream until they reach the leaks, where they are deposited and build up at the leak edges until the leaks are sealed. Specialized software allows both the technician and customer to view the process in real time.

The technology was developed within the Indoor Environment Program at Lawrence Berkeley National Laboratory, whose IAQ scientists tested it. The research was funded by US Environmental protection agency, US dept. of Energy, Electric Power Research Institute and California Institute of Energy and Environment.

The University of California was granted initial patents in 1996 and 1999, and Aeroseal holds an exclusive license to the technology.

While energy savings vary based on climate, utility rates, and your heating and cooling system, the other goals of even temperatures in all rooms, improved indoor air quality, and reduction of odors and fumes will be achieved regardless of those conditions. In commercial building applications, Aeroseal also solves air flow and ventilation problems in addition to energy savings.

Seal & Verify Where do we start?

Before the Aerosealing process of the duct system starts, all registers are closed with foam plugs.

A small access hole is cut into the supply or return air plenum and a temporary collar is attached. The air conditioning indoor coil, fan, and furnace are temporarily blocked with a foam plug to avoid the entrance of any sealing particles into this equipment.

Once the preparation is over, the patented Aeroseal machine is connected to the duct system with a flexible plastic tube.

Upon completion of the sealing process, the results are verified and provided to the customer.

We solidly stand behind our product which is UL-tested and the result of years of government lab research.

Aeroseal warrants to the Sublicensee that the Aeroseal Sealant Products sold by Aeroseal shall be of like grade and quality to and in accordance with Aeroseal’s published Data Sheet for such Aeroseal Sealant Products. In addition, subject to limitation and provisions of Patent Sub-license Agreement, Aeroseal warrants to the Sublicensee dealer that, when properly applied in accordance with the Technical Manual and other training materials, the duct seals created according to Licensed Services will be free of defects for a period of 10-years in residential applications and for a period of 3-years in commercial applications, after the date of the sealing application.

Upon establishing that the foregoing warranty has been breached, Aeroseal LLC’s sole obligation will be to reimburse Sublicensee dealer an amount equal to Sublicensee’s direct documented costs to repair or replace the defective duct seals, including the direct labor costs of performing the repair or replacement.

AEROSEAL, LLC WILL NOT BE RESPONSIBLE FOR ANY SPECIAL, INDIRECT OR CONSEQUENTIAL PROPERTY OR COMMERCIAL DAMAGE OF ANY NATURE WHATSOEVER. Some states do not allow the exclusion of incidental or consequential damages, so the above limitation may not apply to you.﻿﻿ 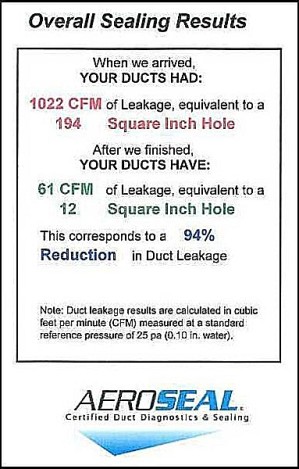 Aeroseal can reduce duct leakage by up to 90%.The measured result of a typical Aeroseal air duct sealing process is shown below:﻿

After the ductwork sealing process is complete, it’s time for the technician to measure the seal.

Explore our new website for a concise overview of our business and the services we provide.